Typically, phenotypic antimicrobial susceptibility testing (AST) takes 1–2 days. With new techniques, the time can be shortened to 30 minutes, a time frame that is suitable for point-of-care testing. Digital loop-mediated isothermal amplification (LAMP) is a highly sensitive method for DNA amplification and quantification. Research demonstrate that digital LAMP can be applied to quantify bacterial 23S ribosomal DNA in urine samples after they are incubated for 15 minutes in the presence (+ABX) or absence (–ABX) of antibiotics. The ratio of bacterial DNA concentration (–ABX / +ABX) determines whether the bacterium is susceptible or resistant to the antibiotic. Link to full article in Science Translational Medicine
Contribution: Tianyan Song, M.D., Ph.D. Clinical Microbiology, Laboratory Medicine, University Hospital of Umeå. Published November 22, 2018.

In the first nationwide study of the imported disease leishmaniasis, we linked data from national health care registers with information in databases of diagnostic laboratories, and calculated the annual incidence of Leishmaniasis in Sweden ranging from 0.02 to 0.36 per 100 000 person-years during the years 1993-2016. We also described demographic data, country of infection, infecting Leishmania-species, geographical distribution of cases, as well as results of diagnostic tests.

There was a rapid rise in the number of cases from 2013 through 2016 and 46% of these cases were children under 18 years. Most common were patients with cutaneous leishmaniasis from Syria, infected with Leishmania tropica.

Apart from migrants from endemic areas, Swedish residents travelling to endemic regions are at risk. One tenth of the Swedish population were born in Leishmania-endemic countries. In one year, 6.8 million trips were made to these same countries by Swedish residents, putting them at risk for cutaneous, visceral or mucocutaneous leishmaniasis, or latent infection which may manifest as clinical disease later in life. 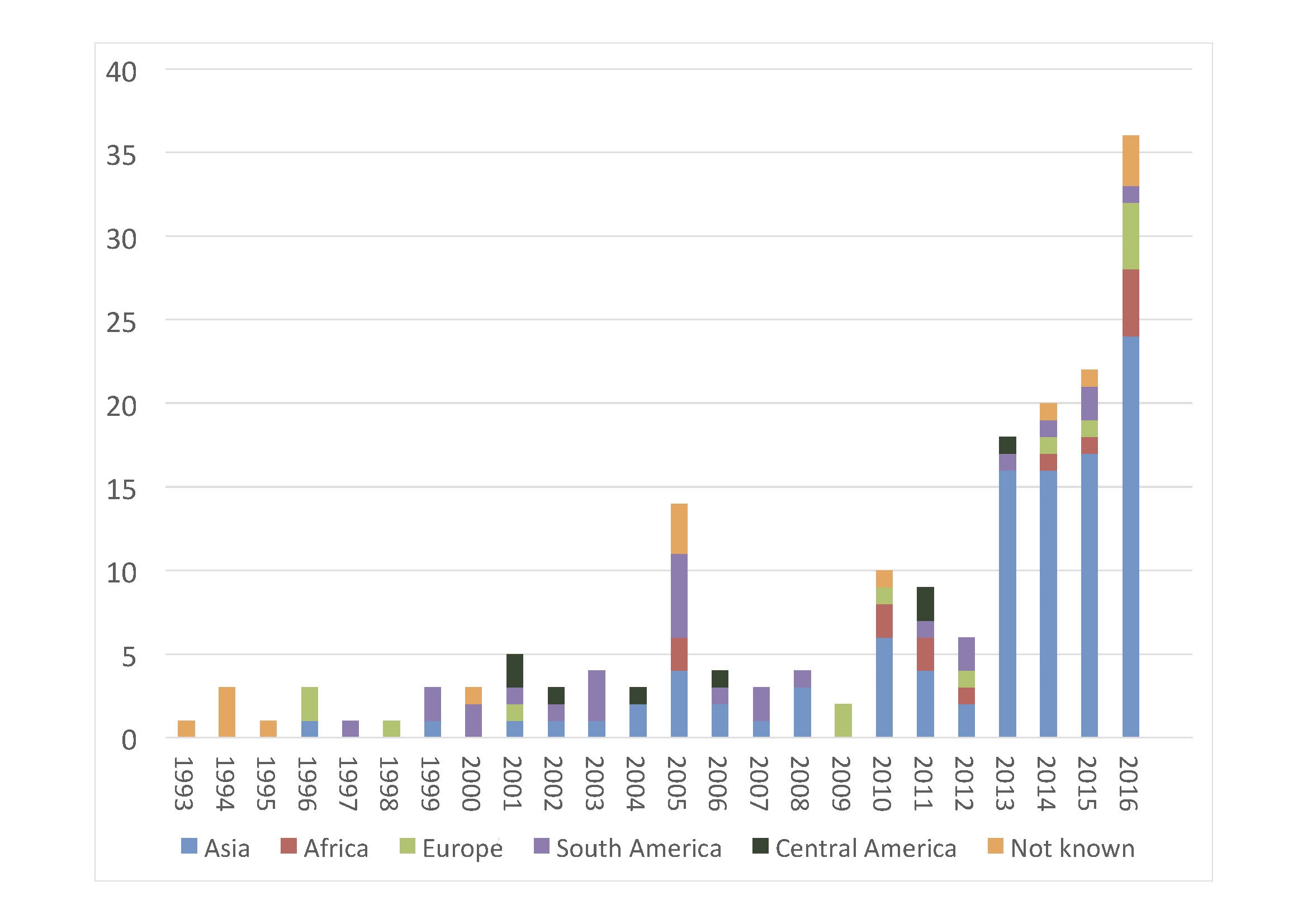 SEPTEMBER 2018:
Increase in transmitted NNRTI resistance in migrants from sub-Sahara diagnosed with HIV-1 in Sweden

To study transmitted drug resistance in individuals with HIV-1 diagnosed in Sweden, we analyzed pol sequences from 1,713 naïve patients diagnosed with HIV-1 in Sweden 2010-2016. Analysis revealed a steep increase in NNRTI resistance from 0% to 16% in individuals with origin in sub-Saharan Africa. This corresponds well to studies from sub-Sahara, where WHO now recommends to shift from efavirenz to dolutegravir backbone in populations heavily affected by transmitted drug resistance.

By using fluorescent powder or gel markers (Glo GermTM) on the exterior of sample tubes and containers laboratory contamination can be measured in a very obvious way after UV-illumination. Laboratory handling of different instrument platforms for molecular biology and POCT, as well as different assay setups and sample types can be tested in the same way and then compared. Both contamination in the lab environment and on the lab technician can be measured by this simple method, as well as visualizing the spread of bacteria on hands and surfaces after hygienic procedures. 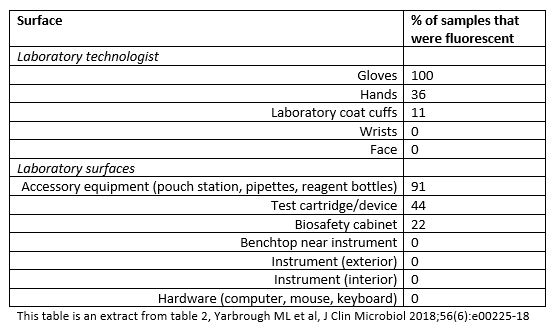 The programmed cell death protein 1 ligand (PDL1) expressed by cancer cells supresses anti-tumour activity of cytotoxic T-cells by interaction with the PD1 receptor on those cells, which may be reversed by anti-PD1 immunotherapy. Recent studies have shown that a low diversity in the gut microbiota with high levels of the Bacteroidales order as well as exposure to broad spectrum antibiotics is associated to a poor response to anti-PD1 therapy. Additionally, three studies published in Science showed that faecal microbiota transplantation to germ-free mice from responders showed maintained efficacy and anti-tumour immune responses following anti-PD1 therapy compared to mice receiving faeces from non-responders.  http://science.sciencemag.org/content/359/6371/32 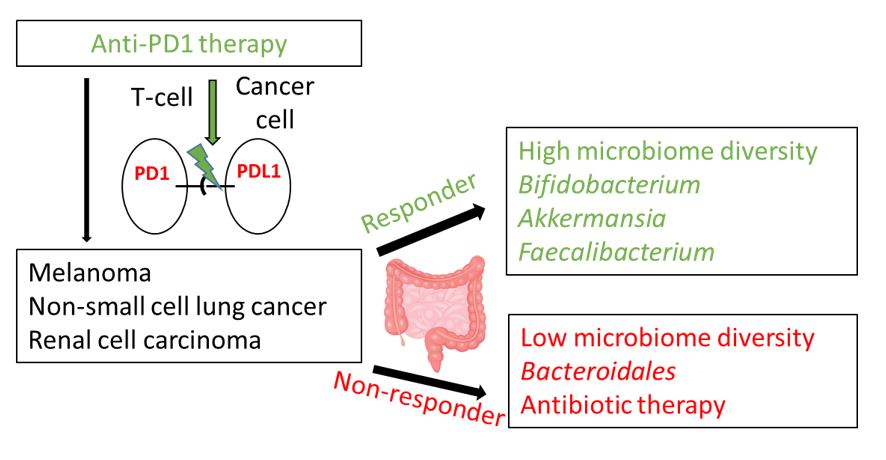 JUNE 2018
Electricity in the gut microbiota is potentially medically important 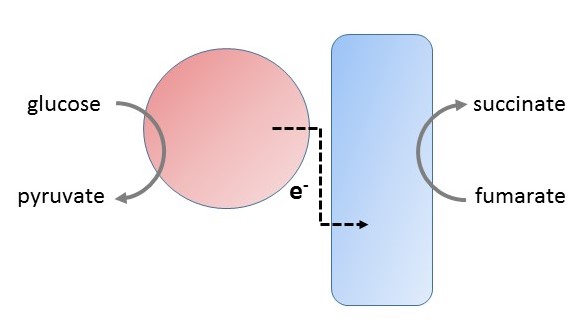 Enterococcus faecalis cells, present as commensals in the gut of mammals, are capable of extracellular electron transfer. That is, the cell can transfer electrons generated in glycolysis to an anode electrode generating a current, as recently demonstrated. This finding infers that in dense microbial communities, such as in biofilm and in the large intestine, metabolism in E. faecalis and similar Gram-positive lactic acid bacteria might be electrically connected to other microbes. For example, carbohydrate catabolism in the electron donating bacterial cell can be coupled to fumarate reduction in the electron accepting microbe. Such intercellular electron transfer confers syntrophic metabolism which can promote growth and other activities of bacteria in the microbiota of humans and animals.

Microbiology Highlights was started in June 2018. All members are welcome to submit contributions.

The format is as follows:

Looking forward to receiving your contribution!